A must have even for modern city usage. Clean design flows allows it to be paired with trousers while the mid ankle shape gives extra ankle support even for rough terrain usage. Ideal for City usage but handles adventures well as well. 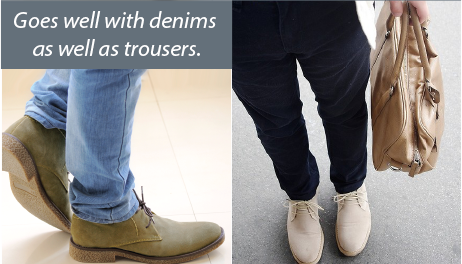 "It all started in 1941 when Nathan Clark (a Clark family member) was sent to Burma as a member of Eighth Army. He noticed that a lot of his Armymen were wearing strange sand colored chukka boots. Clark learned that these were made by Egyptian cobblers as a replacement of the failed official army boots. These were light weight and had strong grip. This is how Desert Boots came into existence. Originally these were made of Crepe Soles and Sand Color Suede uppers. This is kind of mid ankle boot which actually arrived around end of World War II. It originated in Egypt but it’s Clarks which made it popular.

Nathan Clark, a Clarks family member was stationed in Burma. He noticed that a lot of his officers were wearing a Suede boots which were made with Crepe Sole. He learnt that officers got these made in Cairo and could comfortably survive the desert in these pairs. Nathan started prototyping these and sent rough patterns back home.

Upon end of the war he returned to London and started using stitch-down technique to stitch the suede uppers to crepe sole. He particularly used Sand color soft suede with orange color thread for the stitch down version of it.

Nathan unveiled his creation at the Chicago Shoe Fair in 1949. The deceptively simple silhouette and unusual crepe sole captivated style editors and customers alike. The warm reception confirmed Clark’s hunch – the Clarks Desert Boot, deemed the world’s first “dress casual” shoe, was a runaway success. It gained popularity over the years and still continues to be extremely popular. The toe shape and simple silhouette make it compatible even for office use.

TZARO does very premium Desert Boots – all made with handpicked genuine leathers which comprises of both Suede as well as full grain leathers. These have been lined with Sweat friendly naked genuine leathers which absorbs a drop of water in less than 80 seconds. The amazing ventilation system in these shoes ensures that sweat travels to surface from where it dries up rapidly keeping your feet cool. The shoes have PU, latex and EVA layers as cushion which keeps your feet padded over the years. The sole is tough TR sole in Crepe finish. These have been made in stuck on construction [unlike the Stitch down in the original Nathan’s version]. The pipping on the edges is another hallmark of TZARO Desert Boots. The detailed thread work on the Vamp adds to its class further and makes it quite distinct.

TZARO desert boots will hold good over 5 years of daily use [if not more] and some of the sober colors in full grain leathers can also be used to fairly formal occasions but wearing these over suits is absolute NO. The only downside of these shoes is that it’s slightly heavy [average 2 Kgs a pair] but that is mainly because of its heavy sole which ensures a very long life of to these. A lighter version of these Boots is also available now and 7701, 7703 series is the same last in lot lighter Soles. More interesting versions are currently on the design table.