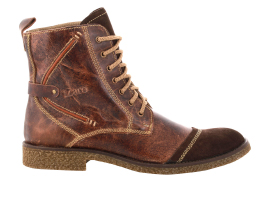 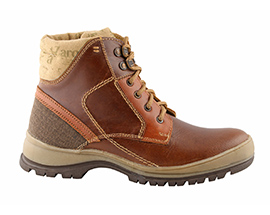 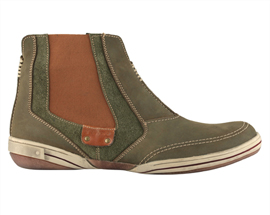 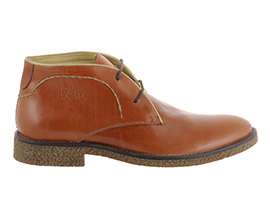 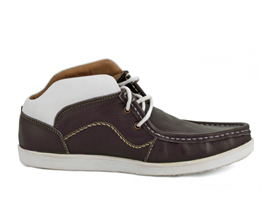 Boots have gained enormous popularity in last few decades, back then it was primarily used for specific objectives like handling Snow terrain, or horse riding or was used by Army. It’s only in last 40 years that it has become very mainstream, infact last 20 years it has become a fashion statement.

Most boots have a heel that is clearly distinguishable from the rest of the sole, even if the two are made of one piece. Traditionally made of leather or rubber, modern...Read more

Boots have gained enormous popularity in last few decades, back then it was primarily used for specific objectives like handling Snow terrain, or horse riding or was used by Army. It’s only in last 40 years that it has become very mainstream, infact last 20 years it has become a fashion statement.

Most boots have a heel that is clearly distinguishable from the rest of the sole, even if the two are made of one piece. Traditionally made of leather or rubber, modern boots are made from a variety of materials. Boots are worn both for their functionality – protecting the foot and leg from water, extreme cold, mud or hazards (e.g., work boots may protect wearers from chemicals or use a steel toe) or providing additional ankle support for strenuous activities with added traction requirements (e.g., hiking), or may have hobnails on their undersides to protect against wear and to get better grip; and for reasons of style and fashion. Most boots mainly cover the foot and the ankle, while some also cover some part of the lower calf. Some boots extend up the leg, sometimes as far as the knee or even the hip.

Early boots consisted of separate leggings, soles, and uppers worn together to provide greater ankle protection than shoes or sandals. Around 1000 BC, these components were more permanently joined to form a single unit that covered the feet and lower leg, often up to the knee. A type of soft leather ankle boots was worn by nomads in eastern Asia and carried to China to India and Russia around AD 1200 to 1500 by Mongol invaders. 17th century European boots were influenced by military styles, featuring thick soles and turnover tops that were originally designed to protect horse mounted soldiers. In the 1700s, distinctive, thigh-high boots worn by Hessian soldiers fighting in the American Revolutionary War influenced the development of the iconic heeled cowboy boots worn by cattlemen in the American west. World war II is where the current Desert boots really became popular.

TZARO boots: are made of premium genuine leather which comes with genuine leather lining. The lining is drum dyed naked leather which allows greater breathability. The specialized lining has amazing ability to handle sweat, it’s basically designed to accelerate the transfer of sweat to the surface where it dries up ensuring that temperate on the inside stays lot more comfortable. All TZARO boots come with long lasting latex and PU padded foot-bed which ensures lower fatigue even on extended usage. There are three families of boots in TZARO

CITY Boots: These are mid-ankle boots; these give extra ankle support and are great even for off road usage. Typically, the focus is more on making these fashion statements than to make it tough and rugged for outdoor usage. You will find interesting top contours and intricate work on uppers. In some of the designs CAMO soles have been used which is rather rare. Mostly these have been done on long lasting rubber soles.

DESERT boots: These are made with tough genuine leather, comes with sweat friendly leather lining and is backed with Crepe finish TR sole. These are somewhat heavy but built for usage over 5-10 years even if you use it daily. These are fairly similar in make to the first set of Desert Boots which were popularized by Nathan Clark in World War II. Desert boots were originally made by Egyptian cobblers which were discovered by British soldiers. Nathan Clark a member of Clark’s shoe family was also a soldier of this regiment, it’s when Clarks started making these that these became very popular even for general usage. TZARO desert boots are very similar to the original Desert boots.

TZARO high ankle boots are designed for heavy usage. Made with tougher leathers like Oil-pullups, crazy-horse. All of these are leather lined and has TZARO sweat free technology. You will never feel uncomfortable in these. Mostly done in heavy duty crepe finish TR sole, these will last long. Avoid taking shoes with suede panels in case you want to use more in outdoor rough conditions. There are number of full leather uppers to choose from. The high ankle boots are good for rugged terrain as well horse riding and amazing even you are using it mostly to impress.

Light Weight Boots Around the Corner

TZARO design team is currently working on an Army boots for SIKH regiment. This is currently in prototyping and testing stage but the objective is to deliver a boot weighing less than 1300 grams and delivering amazing cushioning as well as flexibility. Army has been struggling with heavy stiff boots and TZARO team has promised them something that will solve this problem for good.

Boots should normally be worn with socks to prevent chafes and blisters, to absorb sweat, to improve the foot's grip inside the boot, or to insulate the foot from the cold.

Pair it with Jackets, T-shirt’s, Denims and it will look good. Browsing Pinterest on Boots will always give you interesting pairing clues and we recommend this approach.Read less